I would have to give Phil Woods’ sax solo on Just The Way You Are credit for making that a hit record.
– Billy Joel

Mr. Phil Woods left an indelible impression on me as a composer, arranger, and instrumentalist. A sincere active transmitter on the stage!
– Eddie Palmieri, ten time Grammy Award winner and NEA Jazz Master

Someone spotted me fondling the saxophone and misinterpreted my avaricious intent as musical interest…” So Phil Wood’s lifelong journey began—a saga he relates with an irreverent, self-deprecating wit, from his earliest days in Western Massachusetts to recording timeless music and traveling the world with jazz legends. Time and again, he sets up a story like a punchline’s coming, and often they do. What you always get is history rich in detail and long in feeling and self-honesty – the personal stumbles and the musical triumphs. Phil left us in 2015; this book he left us is a gift that shows how so much of him is still here.
– Ashley Kahn, music historian and author of A Love Supreme: The Story of John Coltrane’s Signature Album & Kind of Blue: The Making of the Miles Davis Masterpiece

Life in E-flat is a gift, a compelling and entertaining memoir by one of the leading alto saxophonists in jazz for 60 years. Phil Woods was a star soloist, influential lead alto player, savvy bandleader, underrated composer-arranger, and consummate studio musician. He was also a charismatic storyteller with a typewriter — literate, funny, insightful, self-aware, with a keen eye and ear for details that reveal character, including his own personal failings. Heroes and colleagues like Charlie Parker, Dizzy Gillespie, Quincy Jones, Benny Carter, and Ben Webster are drawn in quick, astute sketches. Observations about the music business, jazz education, and the vagaries of the jazz life are laced with wisdom and sardonic wit. The book is also an invaluable portrait of world that has vanished: Juilliard at midcentury, the band bus, the bustling post-war bebop academy of the streets, the New York studios of the ‘60s, the European jazz scene of the early ‘70s, and the energy and excitement of a remarkable life lived among some of the greatest giants in jazz history.
– Mark Stryker, author of Jazz From Detroit 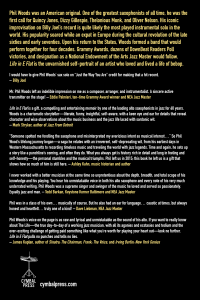 Phil Woods was much too humble and unassuming a guy in so many ways to ever think of himself as either “fierce” and/or “fearless,” but as a club owner and producer who worked with Woods for scores of sets and several sessions, I’ve felt for quite some time that Phil was both a fierce and fearless delver into the inner dimensions of melody, harmony, and rhythm.

I never worked with a better musician at the same time so unpretentious about the depth, breadth, and total scope of his knowledge and his playing. You hear his unmistakable voice in both his alto saxophone and every note of his very much underrated writing. Phil Woods was a supreme singer and swinger of the music he loved and served so passionately. Equally jazz and man…
– Todd Barkan, Keystone Korner Baltimore and NEA Jazz Master

Phil was in a class of his own….musically of course. But he also had an ear for language… caustic at times, but always honest and heartfelt… truly one of a kind!
– Dave Liebman, NEA Jazz Master

Phil Woods’s voice on the page is as raw and lyrical and unmistakable as the sound of his alto. If you want to really know about The Life — the true day-to-day of a working jazz musician, with all its agonies and ecstasies and tedium and the ever-exciting challenge of getting paid something like what you’re worth for playing your heart out — look no further. Life in E-Flat pulls no punches and tells no lies.
– James Kaplan, author of Sinatra: The Chairman, Frank: The Voice, and Irving Berlin: New York Genius

Phil Woods was a wonderful alto player, a great musician that was at home in any musical situation. His autobiography is a must-read for all jazz fans and musician alike.
– Charles McPherson, saxophonist and composer

Growing up a New York jazz fan, Phil Woods was always a favorite. He was straight ahead, personal but in control, brimming with ideas: solid in every way. This account of the late jazz man’s American journey, assembled with a loving, light touch by the always discerning critic Ted Panken, is like a Woods’ gig. Full  of the right information, things you thought you knew but didn’t (the stories of often being the only white man in the room especially after marrying Charlie Parker’s widow are instructive), heartbreaking and triumphant, Life in E-Flat is 100% solid.
– Mark Jacobson, author of The Lampshade and Pale Horse Rider, former staff writer of the Village Voice and New York Magazine, and contributing editor for Rolling Stone and Esquire