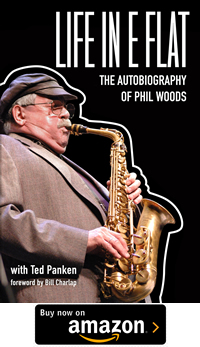 Cymbal Press is proud to announce the publication of Life in E Flat – The Autobiography of Phil Woods. This autobiography, decades in the making, is the candid memoir of one of the world’s most accomplished and highly regarded jazz artists. Life in E Flat is the unvarnished self-portrait of an artist who loved and lived a life of bebop. (Written by Phil Woods with Ted Panken)

“Phil Woods lived all the tropes of the 20th century American artist: defiant modernist, reverent traditionalist, mid-century family man, countercultural nonconformist, homebody, expatriate and road rat; young Turk and grand master. His story tracks the changes of “this old world” through over three quarters of a century of music and life, informing us of what has been gained and lost, reminding us of what happened and what still needs to be done.”
– Brian Lynch, Grammy Award-winning trumpeter, composer, and educator

“I would have to give Phil Woods’ sax solo on “Just The Way You” Are credit for making that a hit record.”
– Billy Joel

“Life in E-flat is a gift, a compelling and entertaining memoir by one of the leading alto saxophonists in jazz for 60 years. Woods is a charismatic storyteller — literate, funny, insightful, self-aware, with a keen eye and ear for details that reveal character and wise observations about the music business and the jazz life laced with sardonic wit.”
– Mark Stryker, author of Jazz From Detroit

““Someone spotted me fondling the saxophone and misinterpreted my avaricious intent as musical interest…” So Phil Wood’s lifelong journey began—a saga he relates with an irreverent, self-deprecating wit, from his earliest days in Western Massachusetts to recording timeless music and traveling the world with jazz legends. Time and again, he sets up a story like a punchline’s coming, and often they do. What you always get is history rich in detail and long in feeling and self-honesty — the personal stumbles and the musical triumphs. Phil left us in 2015; this book he left us is a gift that shows how so much of him is still here.”
– Ashley Kahn, music historian and author

About Phil Woods
Phil Woods (1931-2015) was an American original. One of the greatest saxophonists of all time, he was the first call for Quincy Jones, Dizzy Gillespie, Thelonious Monk, and Oliver Nelson. His iconic improvisation on Billy Joel’s record, “Just the Way You Are,”  is quite likely the most played instrumental solo in the world. He also recorded dozens of albums as a leader and sideman. Phil Woods’ popularity soared while an expat in Europe during the cultural revolution of the late sixties and early seventies. Upon his return to the States, Woods formed a band that would perform together for four decades. Grammy Awards, dozens of DownBeat Readers Poll victories, and designation as a National Endowment of the Arts Jazz Master would follow.

About Ted Panken
Ted Panken writes extensively about jazz and creative music for various publications, including DownBeat, Jazziz, and Jazz Times. He programmed jazz and creative music on WKCR-FM in New York City from 1985 through 2008, and has conducted numerous public interviews for the National Jazz Museum in Harlem and at various international jazz festivals. He won the 2007 ASCAP Deems Taylor Award for his article “Smalls Universe,” published by DownBeat, and earned the Jazz Journalists’ Association 2016 Lifetime Achievement in Jazz Journalism award. His blog, Today Is The Question, contains over 290 of his articles and verbatim interviews. tedpanken.wordpress.com

Life in E Flat – The Autobiography of Phil Woods with Ted Panken; foreword by Bill Charlap; essay by Brian Lynch

** To request a review copy of the book or arrange an interview, please email press@cymbalpress.com **